Few would argue that the hot-button issue of gender equality and equal pay in the workplace is going anywhere anytime soon. But does that apply only to developed nations like Denmark, Norway, Sweden, the United States, and the United Kingdom? Well, certainly not in our (most) humble opinion! Below is a brief look at how the humble little coffee bean (or seed, if we’re being ‘politically correct’ here (and we want to be ‘PC’ for sure when it comes to this topic!)) is driving cultural conversations and, ultimately, change in countries that matter!

As we cycle in and out of elections around the world, very few politicians and leaders are being let off the hook when fielding questions about pay gaps between men, women, transgender, transitioning persons, and the like. These issues have been at the fore for many, however, and regardless of whether they work in San Francisco’s non-profit sector or schools in Central America.

What matters most, of course, is that the conversation is taking place the world over…

but what of action? What industries are talking the talk and walking the walk?

Well, we here at CoffeeGrindGuru want to take a moment to consider those lady bosses, empowering male mentors, and gender-neutral, gender-blind, or gender-indifferent who are making a difference one community at a time.

70% of coffee labor is performed by women

Most industries, green coffee production included, begin as male-dominated. This is, of course, seen throughout entire production processes as well as supply chains. While we have previously reported on how to get a green bean to a cup, did you, cup o’ joe connoisseur, know that women perform more than 70 percent of that labor?

What’s more, and sadly, these gals only own, on average, 15 percent of coffee-producing land? This says nothing of gender-neutral persons, which, we can only assume, is much worse. To wit, and as reported by the International Trade Centre:

So, why should you care? Well, besides women and coffee going hand-in-hand in reducing extreme poverty in many low-income nations (a topic we cover here and feel very passionately about), they’re just, er, better at it!

Consider, some of the top green beans are grown, cared for, and roasted by women. Oh, and they’re kicking everyone’s butt when it comes to international cupping contests. Recently:

Quickly, any score in excess of 90 means the green little bean exceeded six strict standards and was considered so good that it could not just be labeled a cup of excellence (though it was!), but a cup of presidential excellence. Seriously…

well, er, if those presidents were to make gender equality and equity a thing of the past first and foremost!

What’s next? A call-to-action to source smartly and get sharing!

The team here at CoffeeGrindGuru believes in supporting these intrepid pioneers of the green bean. That said, there are a number of lady-bosses taking action in the community by opening their own shops and third-places à la Howard Schultz, but it’s about more than that.

What we mean to say, and suggest, is that by sourcing the very best you are already, very likely, already supporting women in the coffee supply chain, roasting biz, and training sector since women are more likely to pay it (i.e., their knowledge) forward to other endeavoring spirits (no gender categorization allowed)!

But don’t take it from your friends here at CoffeeGrindGuru, but Gandhi himself when speaking on trees and seeds:

No two leaves are alike and yet there is no antagonism between them or between the branches on which they grow.

Savor that through for a moment and see you next time!  Cheers!

Generally, when shopping for coffee, you may see them offered in two ways, whole bean or ground. Each type has pros and cons and may appeal to different drinkings. How different are they? Whole bean… 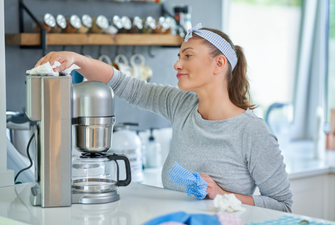 Mornings can be rough, and a great cup of coffee can smoothen them and ease you up. This means the last thing you want in the morning is to sip on odd-tasting coffee. Weird-tasting coffee… “Coffee and wine and all things fine!” might be a rallying cry for some, but what marks each drink as distinctive, excellent, and, yes, even presidential? Come with us as we endeavor to discover what… Almost all baristas will agree that if you want the best tasting coffee, you should grind it yourself before you brew it. This means if you insist on only the best coffee, you will need… After reading this comprehensive guide on coffee roasting and coffee roasting techniques, you should feel 10x’s more confident turning those little green seeds (yes, they are seeds before beans) into a mighty fine cup o’… Moka pots are a convenient way to make coffee, but there is a fine art to getting the most flavor out of them. If you take them off the heat too soon or too late,…